Don’t buy (or stream) the bootlegs. 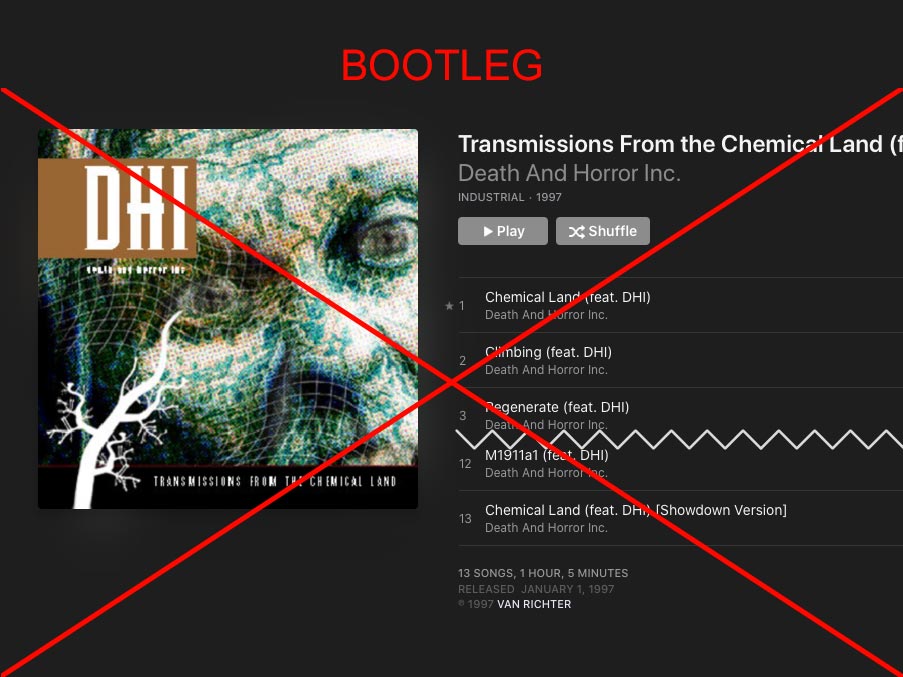 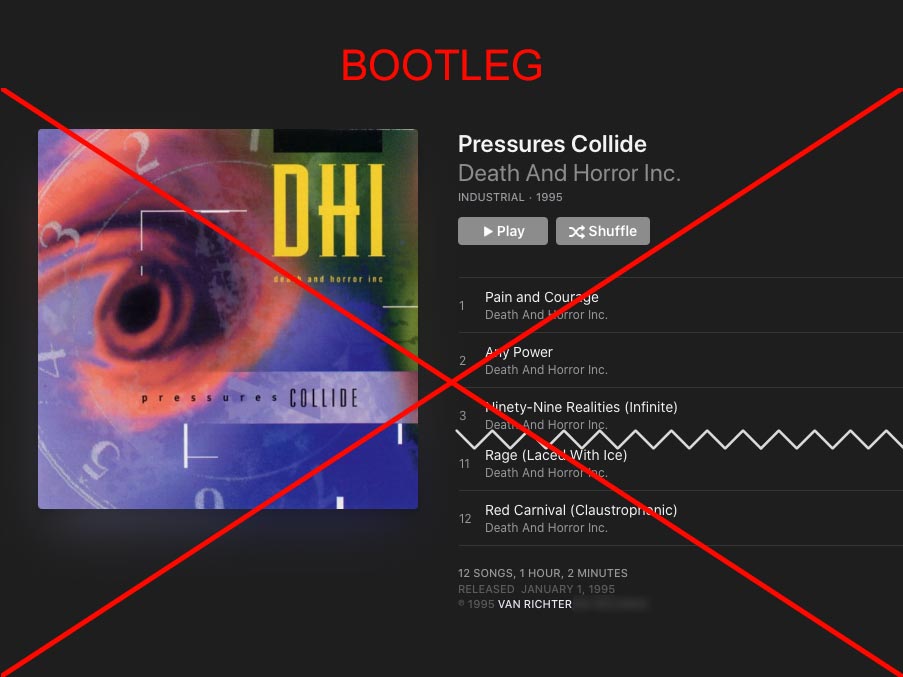 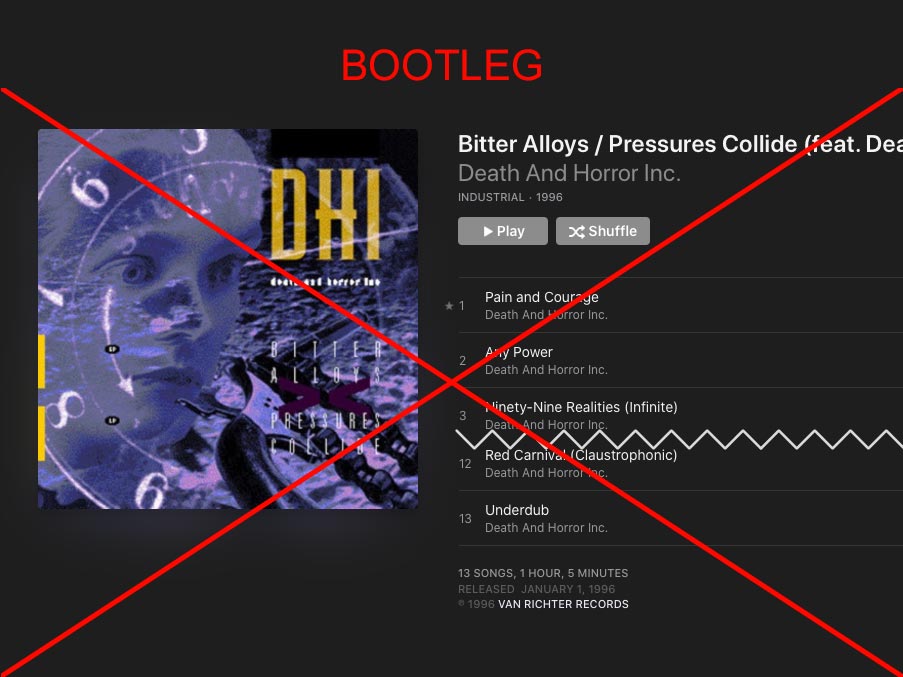 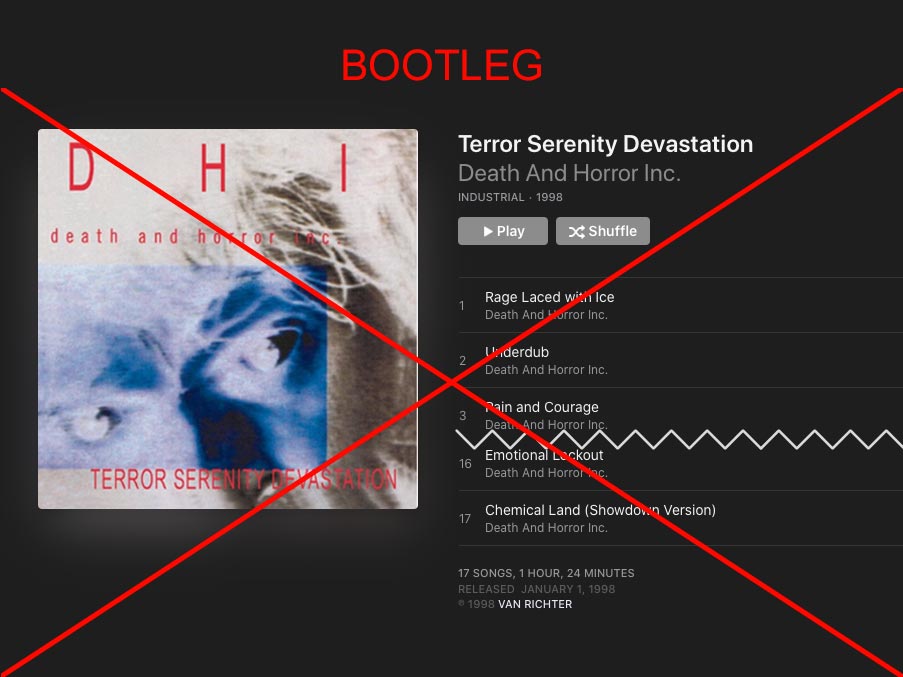 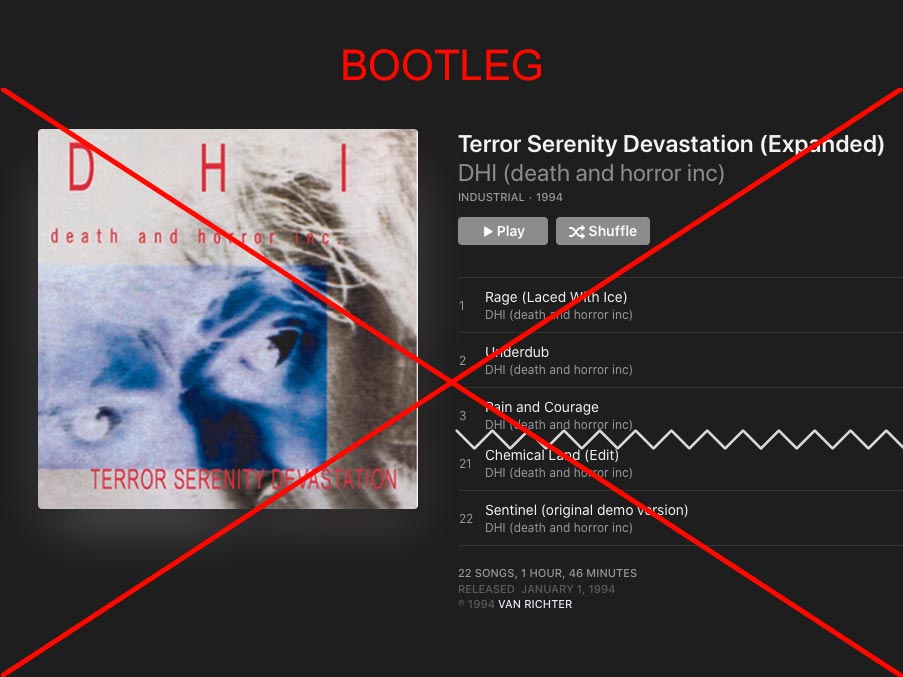 …plus any of our tracks which appear on any of the compilation albums released by the “record label” above.

If you would like to buy our music, we kindly ask that you only purchase it using the links on our official site.

Why? Because we are being ripped off by a “record label” which is selling our material despite having no rights to do so whatsoever. The releases sold by that label are not authorized by the band, and we receive no royalties from them. In an attempt to justify their actions, the label has fraudulently proclaimed that we owe them money. To be perfectly clear: if there is any party that is owed payment in this situation it is DHI.

In the 36 year history of DHI, this U.S.-based label briefly had a limited license (under contract) to manufacture and sell two physical DHI CD albums, and just one various artists compilation CD featuring DHI. The total timespan for this license was 1995-2002, and the licensed territory was only the USA and Mexico. Under this license contract, the label no longer had any right to use our material beginning in 2002. Furthermore, digital formats were not included in the deal.

Since the expiration of this label’s license in 2002, it has continued to fraudulently represent itself as being our record label despite having no rights whatsoever to do so, and despite being sent a cease and desist letter by DHI’s attorney in 2007.

DHI owns all of its material, and we have not granted any label the right to use any of it since 2002. The only legitimate DHI releases available for purchase or streaming are those released directly by us, on our own self-titled label. Links to those releases are here on our site. Our releases include our entire catalogue, and we are very pleased to be making that work available to our listeners.

While we are on the topic of “listening”…

The “record label” that is bootlegging us also falsely claims that its DHI releases are “remastered”. In actuality, their albums contain degraded audio from a variety of unofficial sources (a hodgepodge of everything from mp3 stream rips to dubs that are generations removed from the originals). There simply is no comparison between those bootlegs and our official 2019 remasters.

To create our official remasters, we went back to the source: our original, raw, (un)mastered tapes. These tapes — which have never been supplied to any record label — allowed us to properly unleash all of the energy and detail in our recordings as had never been done before. The process was truly a labour of love, with no deadline (very much the polar opposite of our early ’90s mastering sessions, where studio time was limited).

Please do the band, and yourself, a favour, and accept no substitutes for our remasters.

Back to the bad news.

We are not the only band that has publicly claimed to have been ripped off by the U.S. label mentioned above. Other artists who have come forward and identified this label as releasing their material without authorization include Malhavoc (here and here), Plastic Noise Experience (here), and Heavy Water Factory (here and here).

Thank you for your time.